Tokyo, February 8 – The four winners of the Gottfried Wagener Prize 2009, the German Innovation Ward, have been announced.  A Jury composed of a standing committee, expert members and chaired by Prof. Dr. Masuo Aizawa, ExecutiveMember of the Council for Science and Technology Policy and former President of Tokyo Institute ofTechnology, evaluated and selected the awardees out of 63 applications from 34 Japanese universities andresearch institutes. The Jury member from the German side is Prof. Bullinger, president of Fraunhofer.

The Winner is Dr. Yuuji Kimura (41) and his team from The NationalInstitute for Materials Science. Their results are highly important in the development of stronger and tougher steel at low temperatures.

The 2nd price was awarded to Dr. Takafumi Fukushima (34) from Tohoku University in Sendai. Fukushima knows
Fraunhofer and announced his interest in visting one of the Fraunhofer Institutes in the near future. We very welcome him to stay for research collaboration.

This German Innovation Award is a Joint project by twelve German companies, the German Chamber of Commerce and Industry in Japan and the German Academic Exchange Service. The ceremony's commemorative speech was held by Nobel Laureate Prof. Dr. Peter Grünberg. In its second year, the German Innovation Award is living up to its promise to foster industry-academia collaboration between Japan and Germany. First year winners have used their grants to visit partner companies, universities, and research institutes in Germany, thus contributing to further strengthen scientific-industrial relations between both nations. 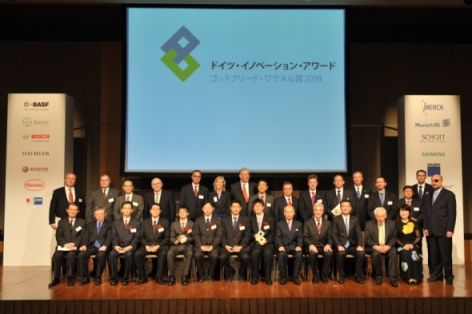 Prof. Dr. Masuo Aizawa
Executive Member of the Council for Science and Technology Policy and former President of Tokyo Institute of Technology

Prof. Dr. Junichi Hamada
President of the University of Tokyo